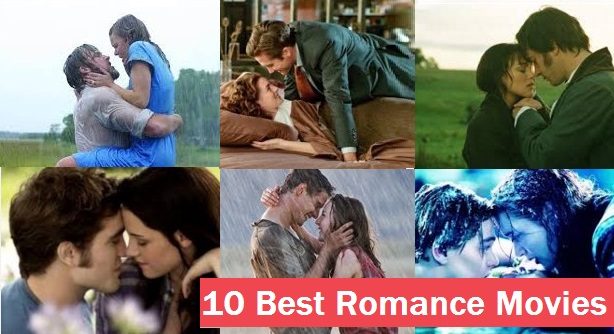 Romance and the film industry go hand-in-hand on the big screen. When it comes to passion and smoochin’, these movies take the cake. You may recognize some of these blockbusters, whilst others are a tad low-key. They all have one thing in common; romance! These, in my opinion, are the top ten best romantic movies (not in order) of all time.

Number 10: The Notebook
The Notebook is a 2004 American romantic drama directed by Nick Cassavetes and based on the 1996 novel by Nicholas Sparks. The film stars Ryan Gosling and Rachel McAdams, who portray a young couple falling in love around 1940. The story is narrated by James Garner, an elderly version of Gosling’s character; Noah Calhoun, who reads from a notebook McAdam’s character Allie Hamilton wrote for him before her onset of dementia. Noah remains loyal to Allie and reads her writing back to her in a nursing home. The end of the movie shows that both Noah and Allie die peacefully in a bed together, stark in contrast to how their love began.

Number 9: Amelie
Amelie is a 2001 romantic comedy directed by Jean-Pierre Jeunet. Guillaume Laurant, along with Jeunet, wrote the film. It’s a fanatical depiction of Parisian life, set in the city of Montmartre. It tells the story of a shy introverted waitress, played by actress Audrey Tautou, who tries to aid others while struggling with her own issues of separation. Upon helping the people around her, Amelie is led to a young man named Nino Quincampoix. She must deal with her inner demons before allowing herself to be with him. I believe the metaphor for this movie is; “What goes around, comes around.” If you do good for others, good shall return to you.

Number 8: Brokeback Mountain
This 2005 film is a tribute to the increasing awareness of equality in America. It features actors Heath Ledger as Ennis Del Mar, and Jake Gyllenhaal as Jack Twist. The film is set in the mid 1900’s where the two cowboys struggle with their feelings for one another. Twist envisions the life they could have together, whereas Del Mar refuses to even imagine it. A scene in the movie; a hanger in a closet holding their two shirts, summarizes their love perfectly.

Number 7: Titanic
I’m sure you’ve all heard this movie title before, and with good reason. This is a film that indulges in the prospect of lower class and upper class pitted against one another in a dance of prohibition. A seventeen year old aristocrat named Rose DeWitt Bukater (Kate Winslet) falls in love with a charming, but poor artist named Jack Dawson (Leonardo DiCaprio) aboard the ill-fated R.M.S. Titanic. The pair fall madly in love, much to the dismay of their friends and family, before the ship crashes into an iceberg and sinks. Jack dies, and Rose is left to remember him well into her elderly years. Before the credits roll, Rose admires a necklace that Jack was accused of trying to steal when they were on the Titanic. She throws it into the ocean, which may be symbolic to moving on.

Number 6: Casablanca
“Set in Casablanca, Morocco during the early days of World War II: An American expatriate meets a former lover, with unforeseen complications.”
Directed by Michael Curtiz and based upon an unproduced stage play titled; Everybody Comes to Rick’s, the film follows Rick Blaine, played by Humphrey Bogart, as he struggles to choose between his love for a former flame (Ingrid Bergman) and helping her Czech Resistance leader husband (Paul Henreid) escape the Vichy controlled Moroccan city of Casablanca so he can continue his fight against the German Nazis. This movie combines violence and passion, as well as the state of the world during WW2. The contrast flows beautifully, as does the sadness and desire within the film itself.

10 Best Romance Movies of All Time